It’s 2020, and we have a world of possibility stretched out in front of us. Will this be the year you pick up a new hobby, or travel somewhere far away, or maybe find a new favorite author? When you’re looking to branch out beyond your go-to reads, we love helping you find a shiny, new (or new-to-you!) author to try. Start your literary year on the right foot with some of these remarkable authors whose works have been translated into English and are ready to be checked out.

If you like your reads to be award winners, Olga Tokarczuk has been unstoppable lately: the Nobel Prize for Literature and the Man Booker International Prize, for starters. Drive Your Plow Over the Bones of the Dead was originally published in Polish in 2009 and is a philosophical, literary mystery that is anything but typical.

Highlighted as a best book for 2019 by both NPR and Time, It Would Be Night in Caracas by Karina Sainz Borgo is a short but powerful read that paints a picture of the extremes of life in Venezuela.

Ludmila Ulitskaya’s Jacob’s Ladder is a Tolstoyan family epic that is just as much about the tumultuous history of Russian and Ukraine as it is about the impressive cast of characters. 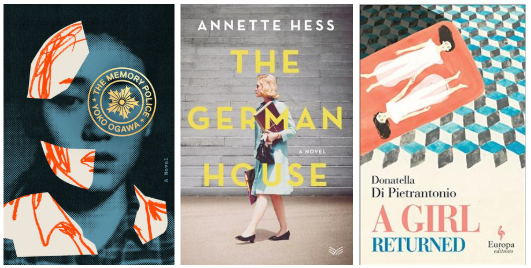 The Memory Police by Yoko Ogawa was actually published in 1994 in Japan, but just hit shelves here in August. This imaginative and lyrical novel leans towards dystopian, and is perfect if you’ve been meaning to pick up your old copy of 1984.

Historical fiction fans should consider The German House by Annette Hess, a uniquely structured novel of self-discovery and family secrets set during Frankfurt Auschwitz Trials of 1963. There’s a strong female lead, and she’s a translator, how fitting!

Translated from Italian by Elena Ferrante’s excellent translator, A Girl Returned by Donatella Di Pietrantonio is a haunting but moving coming-of-age story about a girl who is forced from the only family she’s ever known, and what it means to start again.