We Are All Immigrants: America, the Promised Land

Since 1900, more than 55 million people have immigrated to the United States from almost every country in the world. With the exception of Native Americans, we are all immigrants or descended from immigrants. No wonder there are so many wonderful stories, told with tears and laughter, about this extraordinary experience. This month, the library launches Coming to America, a year-long series examining the immigrant experience.

The library invites you to embark on your own journey of discovery: attend a Coming to America lecture, book discussion, or movie screening and/or pick up one of these thought-provoking works of fiction about what it means to be an immigrant in this land. 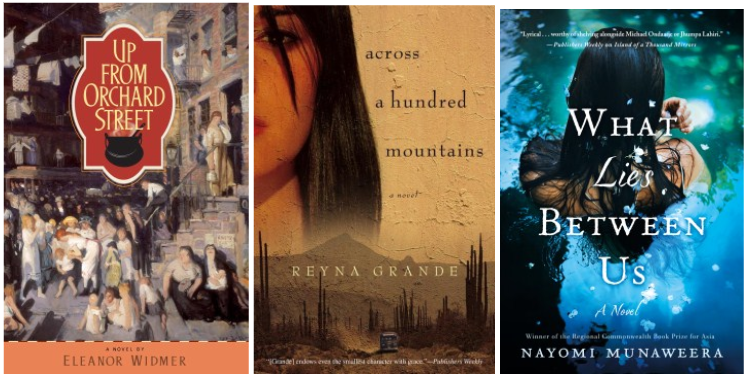 Up from Orchard Street by Eleanor Widmer
Number 12 Orchard Street is home to three generations of the Roth family. The novel tells the story of living in a crowded tenement on New York City’s legendary Lower East Side, and of lives filled with heartbreak and humor, poverty, crises, and, always, delicious food.

Across a Hundred Mountains by Reyna Grande
Juana García has left Mexico to find her lost father in the U.S.; Adelina Vaquez has left her family to follow a lover to Mexico. Meeting in a Tijuana jail, the two women's mutual support carries them through desperate times and forges an enduring bond.

What Lies Between Us by Nayomi Munaweera
Ganga leads a happy childhood in Sri Lanka, until one night when terror strikes her family and she is forced to flee with her mother to America. She reinvents herself as an American teenager, but can she escape her past and what will she need to do to survive?

The Immigrants by Howard Fast
A classic family saga of fortune, fame, and love centered around Irish, Chinese, and Italian immigrants in San Francisco at the turn of the 20th century.

Girl in Translation by Jean Kwok
Kimberly Chang is a recent immigrant from Hong Kong—an exceptional schoolgirl by day, a sweatshop worker by night. The teen tries to adjust to life in New York with her mother and make a future for them both.

Brooklyn by Colm Tóibín
After WWII, Eilis Lacey reluctantly leaves her family in Ireland to work as a bookkeeper in Brooklyn, where she finds love but is torn between her new life and events back home. 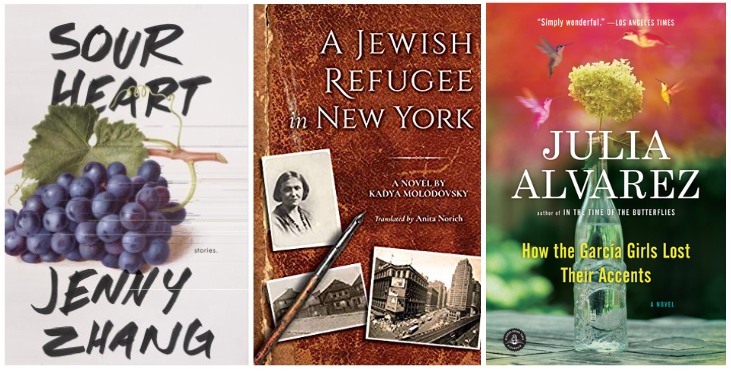 Sour Heart by Jenny Zhang
A collection of stories exploring the inner lives of a group of adolescent girls from China and Taiwan who come of age and come to terms with their pasts in a New York City artists community.

A Jewish Refugee in New York by Kadya Molodovsky
Fleeing Poland for New York in 1939, 20-year-old Rivke Zilberg keeps a diary of her emotions after losing her mother and her fiancé, and her efforts to become an American, with its challenges and opportunities.

How the García Girls Lost Their Accents by Julia Alvarez
Political upheaval in early 1960s forces Carlos, Laura, and their four daughters to flee Dominican Republic high society for a lesser existence in the Bronx. Caught between the old world and the new, the girls try to become American teenagers while still honoring their family traditions. 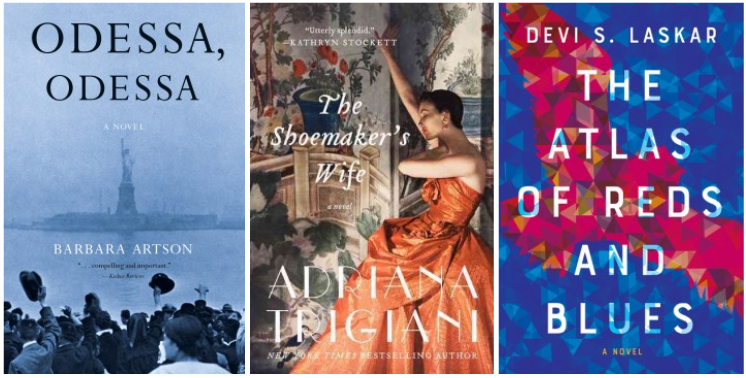 Odessa, Odessa by Barbara Artson
To escape brutal anti-Semitic pogroms, two brothers and their families leave the Black Sea port city of Odessa. One emigrates to the U.S., the other to Israel. Separated by geography but united by love and tradition, the families' stories unfold over decades.

The Shoemaker’s Wife by Adriana Trigiani
Separated by years and miles, star-crossed Italian lovers Enza and Ciro cross paths again in the U.S. in this family saga full of history, love, loss, and questions of destiny.

The Atlas of Reds and Blues by Devi S. Laskar
Life hasn’t gotten any easier for Mother, a woman of color and American-born daughter of immigrants. One day her frustrations as daughter, wife, mother, and worker boil over with devastating results.