The future is here

How will life on Earth survive if climate change leads to catastrophic natural disasters? How can a family survive a massive flood? Often set in the present or the future, climate fiction explores stories of how people will be forced to adapt to a world that has been altered by climate change. Fans of science fiction, speculative fiction, and thrillers will want to delve into the growing genre of climate fiction.

You won’t want to miss The Overstory by Richard Powers, winner of the Pulitzer Prize in Fiction (2019). Powers expertly weaves stories about the lives of nine people who are impacted and inspired by trees. Together, they guide the reader through the journey of a forest that is in danger of being destroyed. The characters in The Overstory show how life is improved by nature and what is lost when forests are decimated. The Overstory underscore how each person has a responsibility to take care of the planet. Fans of literary fiction and nature writing will enjoy this book. [e-book | print | audiobook]

Hugo and Nebula Award winner Kim Stanley Robinson explores Earth’s future in The Ministry for the Future. In 2025, the Ministry for the Future was created; the group’s mission was to ensure the safety of future generations. The novel follows Mary Murphy, the leader of the Ministry for the Future, as she attempts to make widespread changes that will prevent the climate crisis from passing the point of no return. Mary must work to get governments and businesses to help her cause while also deflecting pressures from the public. Robinson’s portrayal of Earth’s ability to collaborate and make progress in the face of climate change presents a hopeful look at the future. [e-book | print | audiobook]

Termination Shock by Neal Stephenson is perfect for fans of thrillers. Set in the future, it is becoming commonplace for the world to live through natural disasters and pandemics. Billionaire T. R. Schmidt, Ph.D. claims that he has the solution to stop global warming, but will his ideas help or make things worse? Fans of The Kaiju Preservation Society by John Scalzi will enjoy this novel. [e-book | print] 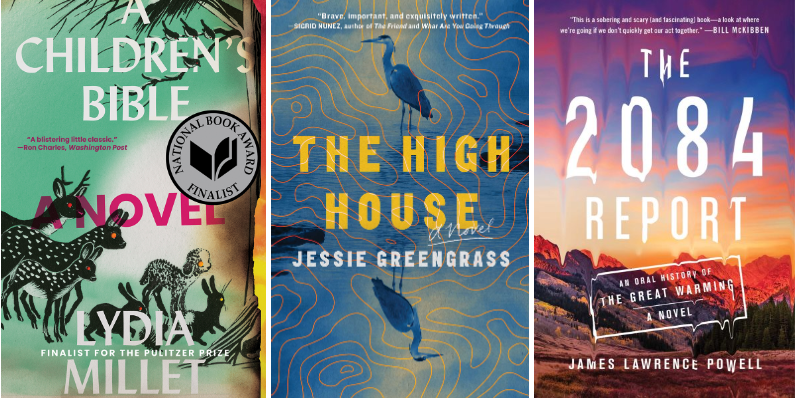 A Children’s Bible by Lydia Millet was a finalist for the National Book Award for Fiction (2020). Set on the East Coast, the book follows a teenage girl named Eve and her younger brother Jack. After a group of families rent a summer house, twelve children must fend for themselves while their parents are drinking, doing drugs, and partying. When a severe thunderstorm causes flooding and power outages, Eve makes a plan to head to safety with all of the children. Millet’s novel is mixed with biblical allusions as events from the novel parallel scenes from the children’s Bible that Jack carries with him. This apocalyptic novel is a page-turner that investigates how future generations will be forced to react to climate change. [e-book | print | audiobook]

In The High House by Jessie Greengrass, a scientist named Francesca begins to make plans for a future that is overwhelmed by climate change. Planning for the worst, she transforms her home in Suffolk–High House–into a refuge. After a devastating tragedy, Francesca’s stepdaughter and young son seek refuge in their mother’s hideaway and attempt to survive mass flooding caused by climate change. This strong, character-driven novel will appeal to fans of dystopian fiction. [print]

Geologist James Lawrence Powell presents an eye-opening look at the future with The 2084 Report: An Oral History of the Great Warming. Set in 2084, a historian collects oral histories from regular citizens, scientists, and politicians from around the world. Powell reveals a world that has been forever altered by droughts, mass migrations, heat waves, and the destruction of coastal cities. Fans of World War Z by Max Brooks will want to pick up this realistic alternative history. [print | audiobook]