Mysteries have broad appeal. It's intriguing to follow the clues and the problem-solving of an investigator, be they professional or amateur, to solve a crime. We've rounded up several mysteries that are not too gory, even though they usually involve murder. This may be a good time to get involved in a well-written mystery, to see if you can figure out who the culprit is before the protagonist does. And, in the end, these are hopeful and satisfying stories.

Get your summer reading started: download one of these titles to your favorite device, grab something to drink, find someplace comfortable to settle in, and lose yourself in a good story.

Based on the Veronica Mars movie and TV series, this book tie-in is the story of a young and very capable young woman who gave up her chance for a life as a New York City attorney at a high-powered firm to return home to Neptune, California, and find her true calling as a private investigator.
Available as an e-book and an audiobook download.

This book is a mix of mystery, war story, and romance. Set in WWI–era England, a humble housemaid named Maisie Dobbs climbs convincingly up Britain's social ladder, becoming a university student, a wartime nurse, and ultimately a private investigator. Both naïve and savvy, Maisie remains loyal to her past. She is a strong protagonist and the book provides an excellent sense of time and place. This is the first in a series. Available as an e-book and an audiobook download.

The Wife, the Maid, and the Mistress by Ariel Lawhon

This is a steamy reimagining of the scandal-marked 1930 disappearance of Justice Joseph Crater. It explores events decades later from the perspectives of the three women who knew him best, including his designer-dressed wife, his showgirl mistress, and his dutiful housemaid. Available as an e-book and an audiobook download.

The Alice Network by Kate Quinn

This compelling mix of historical fiction and mystery is the story of pregnant Charlie St. Clair, an American college student who, having been banished from her family, arrives in London in 1947 to find out what happened to her beloved cousin Rose, who disappeared in Nazi-occupied France during the war. She meets a former spy who, torn apart by betrayal, agrees to help her on her mission. Available as an e-book and an audiobook download.

Auntie Poldi and the Sicilian Lions by Mario Giordano

Auntie Poldi is larger than life, a sassy and brassy sixty-year-old widow who moves to Sicily for a quiet retirement. A murder spoils her plans. Told from the point of view of her nephew, this enjoyable read combines an enticing mystery and investigation along with thoroughly complex characters. This is the first of a series. Available as an e-book.

The Widows of Malabar Hill by Sujata Massey

Bombay's first female lawyer, Oxford graduate Perveen Mistry, investigates a suspicious will on behalf of three Muslim widows living in seclusion. They become subject to a murderous guardian's schemes for their inheritances. The story provides perspective on women’s rights and relationships. Each of the many characters is well described, flaws and all, which is the key to understanding their surprising roles in this well-constructed puzzle. Available as an e-book.

The Perfect Couple by Elin Hilderbrand

When a bride-to-be is found dead in a harbor, Chief of Police Ed Kapenash searches for the killer within the victim's own wedding party. Popular author Hilderbrand succeeds in creating another domestic drama with a beach setting and a satisfying conclusion. Available as an e-book

Horowitz’s unusual stand-alone combines two books in one—the first, set in 1950s England, is a wonderfully written Agatha Christie–style whodunit complete with vicar, village, and vengeance. The second, set in modern times, stars an editor who must solve a mystery surrounding that 1950s whodunit, as her publishing house’s fortunes rest upon its success. Available as an e-book and an audiobook download.

Chief Inspector Armand Gamache of Canada's Surete du Quebec is called to Three Pines, a tiny town south of Montreal, to investigate the suspicious hunting accident that took the life of Jane Neal, a local fixture in the village. This excellent mystery explores love, friendship, and tragedy. The first in a series that will draw you into the life of the village of Three Pines. Available as an e-book and an audiobook download. 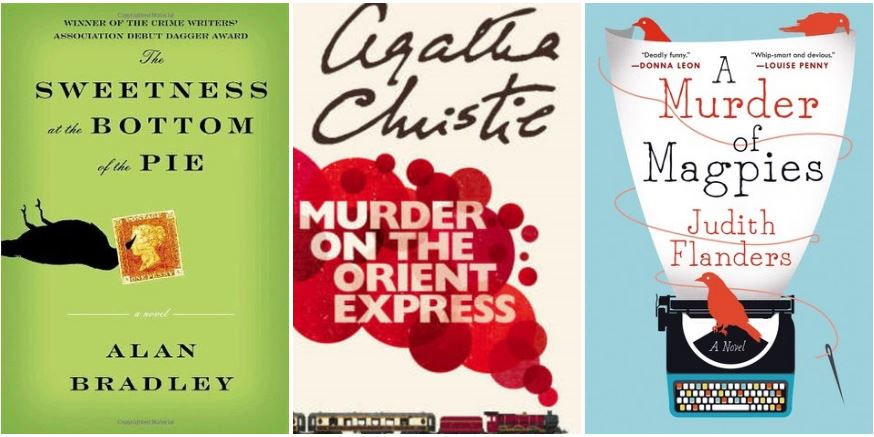 The Sweetness at the Bottom of the Pie by Alan Bradley

Flavia de Luce is eleven years old and an aspiring chemist with a passion for poison. When a dead bird is found on the doorstep of her family's mansion in the summer of 1950, she is propelled into a mystery surrounding a man's murder. The main suspect of the investigation? Flavia's father. This is the first in a series. Available as an e-book

Murder on the Orient Express by Agatha Christie

On a three-day journey through the snowbound Balkan hills, Hercule Poirot must weed through an array of international suspects to find the passenger who murdered a gangster on the Orient Express. A classic Christie that has stood the test of time. Available as an e-book and an audiobook download.

A Murder of Magpies by Judith Flanders

The sharp narrator is Samantha, a forty-year-old British book publishing editor whose best author goes missing after writing a tell-all book about a famous French fashion designer who died under suspicious circumstances. A very funny and entertaining read. This is the first in a series. Available as an audiobook download.