If this week's Summer Camp theme is inspiring you to read a book that explores music, here are several suggestions, available as e-books, downloadable audiobooks, or in print.

In The Prague Sonata by Bradford Morrow, Meta is introduced to a reclusive Holocaust survivor who has carried one movement from an unpublished sonata with her for nearly 60 years. What follows leads her into a twisting mystery of where the sonata came from, who wrote it, and if the remaining movements can be recovered.

The Mambo Kings Play Songs of Love by Oscar Hijuelos is a rich, sensuous novel about two musician brothers, Nestor and Cesar. As Cesar looks back on his life, the reader learns the stories of the brothers' careers and their loves. This Pulitzer Prize–winning book is non-linear and highly descriptive of Cuba and the Cuban American community in which the main characters live.

The Jazz Palace by Mary Morris takes the reader to 1920s Chicago, where a grieving Jewish pianist enthralls patrons of a jazz bar run by the mob.  Morris’s descriptive writing about jazz, Chicago, and the Jazz Age weaves a compelling story.

The Ensemble by Aja Gabel spans 18 years as four string musicians come together as a young ensemble, grow, and learn. In their pursuits to succeed as musicians, they must balance life, work, and family.

Goodbye, Paris by Anstey Harris introduces the reader to Grace, a once-promising cellist, who ceased to play after a traumatizing college experience. She restarts her life as an accomplished instrument maker, hoping to win prizes with her precision-crafted violins. Quirky characters and beautifully written descriptions of music make the novel entertaining and endearing.

The Music Shop by Rachel Joyce. As the world turns to CDs in late 1980s London, Frank tries to keep his shop full of vinyl afloat. When a young woman faints in his store and returns the next day to ask for lessons in music appreciation, a story unfolds that shows the power of music to heal.

In her memoir Just Kids, Patti Smith chronicles her early years in New York, when she developed a deep friendship with ground-breaking photographer Robert Mapplethorpe and she grew into an acclaimed musician, songwriter, and artist.

Me by Elton John. In his only official biography, Sir Elton talks of his music and relationships, addiction and recovery, and how he became the person and musician he is today.

Born to Run by Bruce Springsteen. The Boss set out “to show the reader his mind” and succeeds in doing so in an autobiography hailed as heartwarming, humorous, and humble. 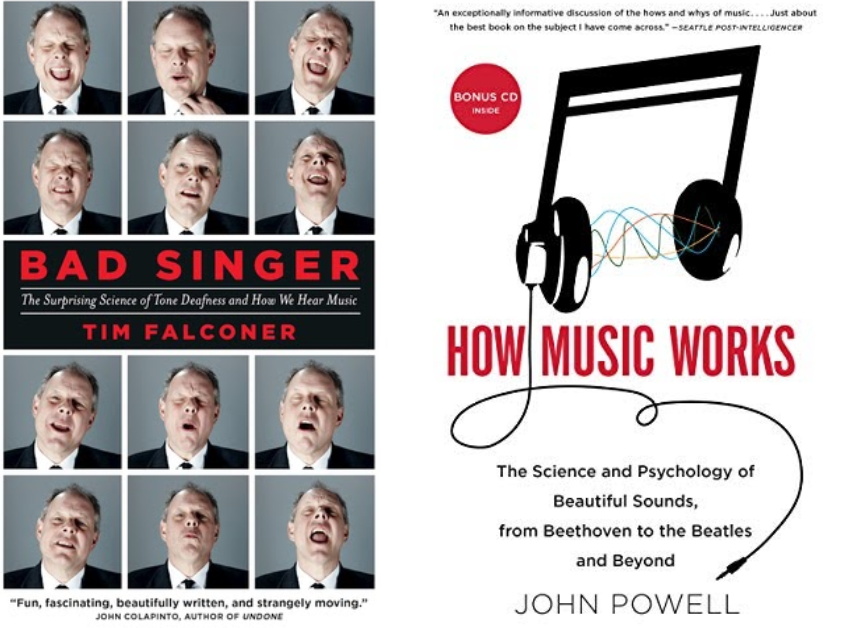 Bad Singer: The Surprising Science of Tone Deafness and How We Hear Music by Tim Falconer. While trying to cure his own tone deafness, Falconer outlines what he discovers as well as the science and psychology of how we listen to and why we love music.

How Music Works: The Science and Psychology of Beautiful Sounds, from Beethoven to the Beatles and Beyond by John Powell. This book reads like a lively discussion with a fellow music fan, covering the secrets behind harmony, timbre, keys, chords, loudness, musical composition, and more. Music Appreciation 101!

Nature in fiction
Must like: long walks on the beach, unforgettable sunsets
Summer blockbusters
Books to make your mouth water
Reading that beats the springtime view out your window