Looking to explore more global literature? These contemporary voices in Russian and Ukrainian literature are the perfect jumping off point.

Mother Country by Irina Reyn
After waiting for ten years, Nadia is granted permission to emigrate to the US, but her daughter Larissa’s application is delayed. Nadia decides to leave Ukraine, hoping that Larissa will join her soon. Seven more years pass by, while Larissa waits and Nadia works several low-level jobs in Brooklyn. Meanwhile, their relationship is quite strained and there is constant worry about Vladimir Putin and war. When Larissa’s access to life-saving medicine is jeopardized, Nadia must take extreme measures to reunite with her. Beautifully written, this story explores the complex mother-daughter bond, the immigrant experience, and the cultural clashes within us with compassion and insight. [print]

Jacob’s Ladder by Ludmila Ulitskaya
One of Russia’s renowned literary figures, Ludmila Ulitskaya has written a sweeping saga following the tangled lives of a family during the turbulent twentieth century. After her grandmother’s death, Nora Ossietzky finds her grandfather Jacob’s letters and diaries revealing details of Russian and Ukrainian life from the 1900s, including the horrors of Jewish pograms, WWI, pre-revolutionary times, the Stalin era, WWII, and time spent in the gulags. Meanwhile we learn of her own life in the theatrical world of 1970s Moscow, including her career, failed marriage, motherhood, and more. Moving across generations, she questions how much we control our own lives versus the forces of history, chance, and genetics. [print]

Good Citizens Need Not Fear by Maria Reva
An old decrepit Ukrainian apartment building, along with all its oddball residents, has been removed from official records by a bureaucratic error. These nine intertwined stories, told with intelligence and black humor, shine an absurdist light on the residents and their ingenious ways to survive official neglect in the chaotic years leading up to the fall of the Soviet Union. Based on her own family’s experiences, Maria Reva has written a brilliant collection for fans of Gary Shteyngart, and Anthony Marra’s Tsar of Love and Techno. [print] 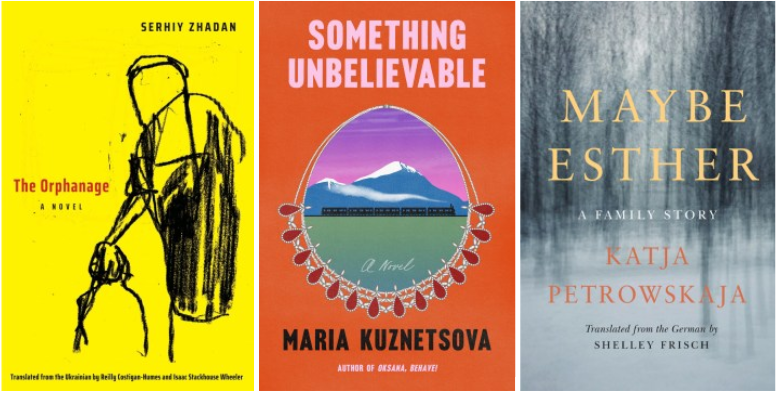 The Orphanage by Serhiy Zhadan
The Orphanage, written in 2021, was chosen as one of “Six Books to Read for Context on Ukraine” by the New York Times. It’s a raw and powerful novel of the human cost of war in eastern Ukraine. Pasha, a thirty-five year old teacher with a medical condition, does his job and stays clear of politics, until a nearby city is occupied by enemy soldiers, and he is sent to pick up his young nephew Sasha from an orphanage there. All around him, roads have been destroyed, public transportation suspended, all services disrupted, and people are trying to flee. He faces a terrifying journey home, dodging mortars, tanks, rifle fire, starving packs of dogs, and of course, desperate soldiers. Written with passion and lyricism, Zhadan shows us the Ukrainians’ will to survive. [print]

Something Unbelievable by Maria Kuznetsova
Natasha, now home in New York City with a new baby, is exhausted and bored, missing her old, interesting life before becoming a mother. She asks her world weary ninety-year old grandmother Larissa, still living in Kiev, to tell her stories about the family’s struggles to survive the Nazi’s invasion of the Soviet Union. Baba Larissa recounts her complicated childhood and exile to Siberia as well as other stories, with nods to classic Russian literature. Told from both Natasha and Baba Larissa’s point of view, this is a compelling story of multiple generations through WWII to the present day, where the past and the present intertwine to shape lives. [print]

Maybe Esther by Katja Petrowskaja
In this very moving debut memoir, Katja Petrowskaja pieces together her scattered family tree across Russia, Ukraine, Poland, and Germany. Having grown up in post-WWII Kiev, and looking for meaning in the stories of her ancestors, she researches the family legends and brings the fascinating characters in them alive. For fans of Jonathan Safran Foer’s Everything is Illuminated and Michael Chabon’s Moonglow. [e-book | print | audiobook]