A menagerie: tales from a pet's point of view

Have you ever wondered what your cat or dog thinks about, how they see the world, or what they would say to you if they could talk? Authors have had those thoughts too, and here are some of their ideas; not just cats and dogs though, but other creatures too. There's something for everyone here - from cozy mysteries to adventure stories and some just plain heartwarming stories, plus some non-fiction included as well.

Wish You Were Here by Rita Mae Brown

Mary Minor Haristeen, postmistress of Crozet, Virginia, joins forces with her willful cat, Mrs. Murphy, and her Welsh corgi, Tucker, to investigate a series of bizarre postcards sent to the town's inhabitants that forecast impending death. The first in a series. [print | audiobook]

Cat sleuths steal the show in these fast-paced and funny fantasy mysteries. While Joe Grey, his sidekick, library cat Dulcie, and their pals have human cognitive abilities, their basic feline nature remains intact. They interact with select human friends as well as cat society, while solving intriguing criminal puzzles. The first in a series. [e-book | print | audiobook]

The Ninth Life by Clea Simon

Blackie, a cat, and his young companion, Care, try to find those responsible for the death of her mentor while first escaping from the clutches of drug dealers, murderers, and thieves. The first in a series. [print]

Dog On It by Spencer Quinn

These humorous mysteries are set in the western United States, starring a charming dropout K-9 dog, and his sidekick human, Bernie, owner of the Little Detective Agency. Told from the mischievous dog’s point of view, this fast-paced series is perfect for animal lovers and crime fans who enjoy funny, upbeat tales. The first in a series. [print | audiobook]

In a heartwarming and moving series of novels, these stories told by animals explore the lives of dogs throughout a cycle of reincarnation as they seek to find and fulfill their individual purpose. As a whole, the series explores the relationships between humans and animals in fast-paced, character-driven stories. [print | large type | audiobook]

A Dog’s Life by Peter Mayle

The author chronicles the exploits of Boy, his clever canine companion, from the dog's perspective, from his humble beginnings to joining the Mayle household to his adventures throughout France. [print]

Mimi Lee Gets a Clue by Jennifer J. Chow

After the local breeder she exposed for mistreating Chihuahuas is murdered, owner of a pet grooming business, Mimi Lee, must clear her name with the help of her talking cat, Marshmallow, who is the only one who can get her out of this mess. The first in a series. [print | audiobook]

Molly and the Cat Cafe by Melissa Daley

When two-year-old tabby Molly, loses her beloved owner, her world falls apart. Re-homed with three cat-hating dogs, she decides to take matters into her own paws and embarks on a grueling journey to the nearest town. As Molly walks the cobbled streets of Stourton, she begins to lose all hope of finding a home...until one day she is welcomed into the warmth by a caring cafe owner. [print]

The Art of Racing in the Rain by Garth Stein

Enzo knows he is different from other dogs: a philosopher with a nearly human soul, he has educated himself by watching television and by listening closely to the words of his master, Denny Swift, an up-and-coming race car driver. On the night before his death, Enzo takes stock of his life, recalling all that he and his family have been through, hoping, in his next life, to return as a human. [e-book | print | large type | audiobook]

Watership Down by Richard Adams

In a constant struggle against oppression, a group of rabbits search for peaceful co-existence, chronicling their adventures in searching for a safe place to establish a new warren where they can live in peace. [e-book | print | audiobook]

This ode to kindness, sacrifice, and the power of small things traces the experiences of adventurous Nana the cat and his owner, Satoru, as they embark on a road trip across Japan to visit three old friends. [print]

Idealistic Fox 8's ability to communicate in "Yuman" cannot save his pack when their den and food supply are destroyed to build a mall, so he writes a letter asking for an explanation of human's cruelty. [print] 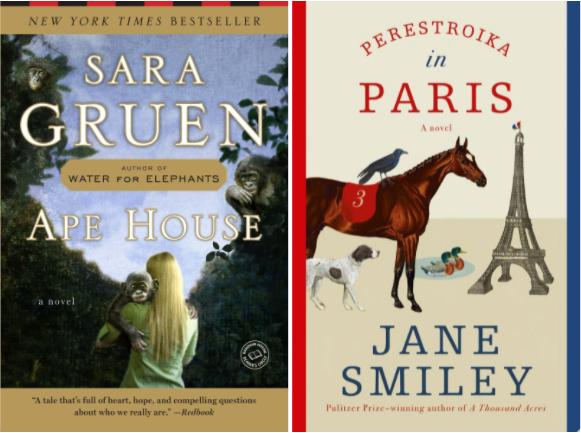 A group of apes are kidnapped from a language laboratory and subsequently cast on a reality television show that calls into question scientific assumptions about common DNA that is shared by apes and people. [print]

Perestroika in Paris by Jane Smiley

Coexisting in the lush hidden spaces of Paris until cold weather arrives, an escaped racehorse and her companion, a German shorthaired pointer, forge a bond with a boy living in seclusion with his grandmother. [e-book | print | audiobook]

Alex & Me: how a scientist and a parrot discovered a hidden world of animal intelligence--and formed a deep bond in the process by Irene Maxine Pepperberg

The story of a famous African Grey parrot documents his thirty-year relationship with his trainer and the ways in which his life has changed scientific understanding about language and thought. [print]

Shares insights into the inner and outer lives of animals to explain how to effectively communicate with the animal world, sharing information from the author's research and experiences with a diverse range of animal subjects. [print | audiobook]

How Stella Learned to Talk by Christina Hunger

An incredible, revolutionary true story and surprisingly simple guide to teaching your dog to talk from a speech-language pathologist who has taught her dog to communicate using simple paw-sized buttons associated with different words. [print]